Dunes as far as the eye can see 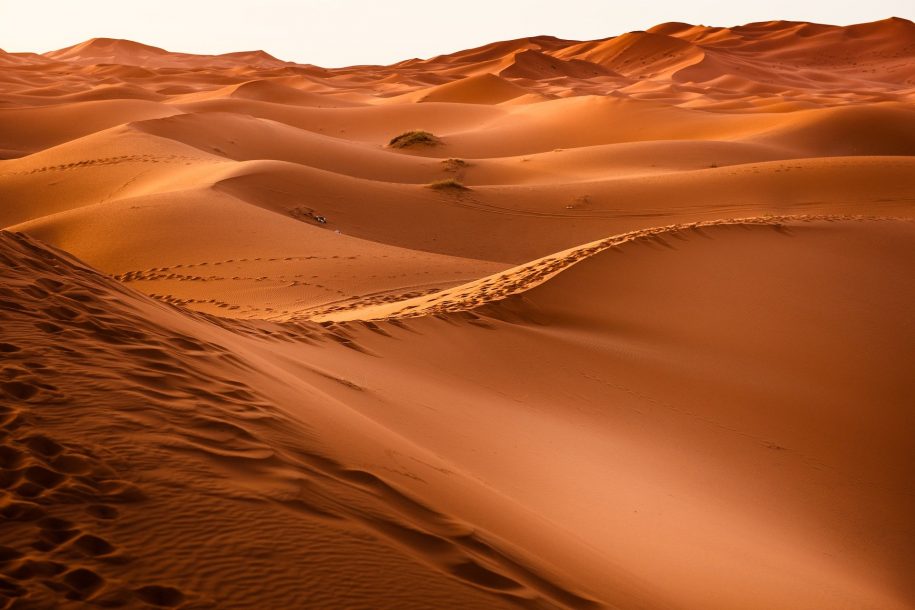 It only rains a couple of days a year in the desert we were told when we booked our trip to Oman.  So how come the rain clouds were gathering as we made our way to our desert camp, negotiating our way along red sandy trails, dodging camels, to the 1000 Nights Desert Camp in Wahiba Sands?  The dunes move constantly which makes permanent roads impossible and we were following a map of tracks which had been made in the sands by the few bedouin that live there and other visitors to the desert camps.  Having resisted the insistent offers of a lift from “guides” at the petrol station on the edge of the dunes, we had let down our tyres to the level advised by the camp and driven into the desert.  It was a fantastic drive and even our sixteen year old daughter had a go at driving in the sand.  When we got to our camp, the rain didn’t bother us.  We were ensconced in our luxurious Ameer tent and after a fabulous buffet dinner were tucked up in our beds listening to the pitter patter of rain on the tent roof.  When we rose the next morning the sun was out and the views spectacular.  After climbing the dune for just ten minutes we were out of sight of any man made objects.  Just unending dunes sculpted to perfection by the wind interrupted only by tiny pieces of scrub and the odd camel loping across the sand.  In fact when we had wandered for half an hour we realised that if weren’t careful we would get completely lost.  We discovered the advantage of rain in the desert.  Not just for the camels and the plants and the Bedouin who eke out a living in the harsh land but for us too.  The rain in the night had  created a crust on the dunes.  They were easy to climb and walk along and only when we walked in each other’s foot steps did we find ourselves sinking down past our ankles in deep red sand.  Sadly we only had one night here on our way back to Muscat.  But you could easily spend a couple of nights here, taking advantage of some of the organised dune trekking and camel rides.  I had chosen this desert camp because it was one of the most remote.  Literally miles from any other camp.  But astonishingly it had a little pool providing a refreshing dip after our morning exertions.  I’m not sure if the pool is a friend of the environment but it did feel like a little oasis in a sea of copper red sand.

More about this and similar destinations